Tolkien and the Musical Cosmogony 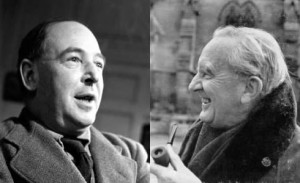 The closest friends, J.R.R. Tolkien & C.S. Lewis revealed in some of their literary writings a special preference for a kind of cosmogony (i.e. creation of the world) less known in Judaic and Christian Traditions. The Musical Cosmogony  this might be a good and proper name for those ancient mythologies, which described the creation of the whole world through music.

In The Magicians Nephew, the sixth book from his series, The Chronicles of Narnia, Lewis describes the beginning of the world, which was created due to a sublime song:

„Then two wonders happened at the same moment. One was that the voice was suddenly joined by other voices; more voices than you could possibly count. They were in harmony with it, but far higher up the scale: cold, tingling, silvery voices. The second wonder was that the blackness overhead, all at once, was blazing with stars. ()

Following the same idea Lewis still describes the creation of all creatures as the majestic lion Aslan  a literary transposition of the Christian Demiurges  through the origins music, generated them:

„When you listened to his song you heard the things he was making up: when you looked around you, you saw them.”

Tolkien likewise followed the same way of a conception in which the music represents the diaphanous instrument which was used by to create the Universe. In his mythological novel The Silmarillion he used the same metaphor, of a musical cosmogony to describe the origin of the world. Thus, after Ilúvatar created the Ainurs  so called the Holy Ones, He (God) proposed a musical theme around which they were able to embroider a music spring from it.

„Then the voices of the Ainur, like unto harps and lutes, and pipes and trumpets, and viols and organs, and like unto countless choirs singing with words, began a fashion the theme of Illúvatar to a great music; and a sound arose of endless interchanging melodies woven in harmony that passed beyond hearing into the depths and into the heights, and the places of the dwelling of Ilúvatar were filled to overflowing, and the music and the echo of the music went out into the Void, and it was not void.”

At this point of Tolkiens story, we can detect the impulse, the motivation of the creation through music, which is the authors strong desire to associate the cosmogony with one of the three transcendental concepts that represent the sublime names of God  the Good, the Truth and the Beauty: „But I will sit and hearken, and be glad that through you great beauty has been wakened into song (Op. cit., p. 3). The reflection of the original beauty over all creation and all the creatures depends on the first music, composed by the Ainurs around Illúvatar musical theme. Subsequent to this cosmological moment, Melkor, the character who will become the opponent of God Himself, creates an original theme, different and in discord with that one created by Ilúvatar (Op. cit., p. 4).

After we have read for many times Tolkiens letters, we were not able to find any sort of clarification about this literary motif of the creation through music. Naturally, such a „mystery” attracted the attention of many scholars, who proposed different interpretations regarding „the musical cosmogony”.

Robert DiNapoli first emphasizes certain differences between the Old Testaments cosmogony and that of Tolkien. He then goes on to mention the possibility of an influence of Pythagorass philosophy about the musical structure of the whole world. As for Tolkiens cosmogony, DiNapoli expresses that it presents a similarity with that of an another Inkling member, Charles Williams who  deeply influenced by Platos doctrine about the relationship between „ideas” and „matter”  created a novel based on Timaios dialogue and the hierarchical structure of the Byzantine Empire (Cf. Robert DiNapoli, „The Valar and Byzantium. Vision of Hierarchical Splendour in Charles Williams and J.R.R. Tolkien”, in Maria Kuteeva (ed.), The Ways of Creative Mythologies. Imagined Worlds and their Makers, vol. II, Tolkien Society, 2000, p. 28). Joseph Pearce has opened another direction to investigate the theological and mythological sources of Tolkiens cosmogony, after he presented the interpretations of some Tolkien scholars  such as Thomas A. Shippey, Brian Rosebury, Robert Murray S.J. (Tolkiens Jesuit friend), James V. Schall S.J. and Richard Jeffrey. Quoting Silmarillions passages where Melkors hybris becomes transparent under the form of his temptation to create a different musical theme, Pearce establishes a link between two passages from Book of Isaiah, chapter 14 vs. 11-12, (Joseph Pearce, Tolkien: Man & Myth, San Francisco: Igantius Press, p. 93). Following the same kind of interpretations, in which the Judaic religious tradition has a central place, Stratford Caldecott considers almost certainly there to be an influence from the Book of Job: „Where were you when the morning stars sang together, and all the sons of God shouted for joy” (Stratford Caldecott, Secret Fire. The spiritual Vision of J.R.R. Tolkien, London: Darton, Longman & Todd, 2003, p. 74). From another point of view, Professor Virgil Nemoianu suggests a different influence on Tolkiens hierarchical vision, originating in the wonderful music of George Frideric Haendels  especially „Coronation Anthems” (cf. Virgil Nemoianu, „The Great Tolkien,” Foreword at Virgil Nemoianu & Robert Lazu – coordinators, J.R.R. Tolkien. Faith & Imagination, Hartmann Publishing House, 2005, p. 7).

In addition to all of these pertinent interpretations, we will attempt to propose another one, which will complete this picture of influences on Tolkiens work. A strong influence, confirmed by the correspondence of the author himself, is the platonic myth of Atlantis. In the context of Ardas history, we can see that Númenor Island is just a transposition of that mythical continent described by Plato in his dialogue Critias, as Tolkien himself affirms in many of his letters (The Letters of J.R.R. Tolkien, A selection edited by Humphrey Carpenter with the assistance of Christopher Tolkien, Harper Collins Publishers, 1995, p. 151 & pp. 197-198). Due to this fact, we can suppose that such a scholar like the author of The Lord of the Rings knows not just Critias, but other well-known platonic dialogues like Timaios, Phaidon and Phaidros. Therefore, one of the main influences on the musical cosmogony from Silmarillion could be the famous dialogue Politeia (i.e. The Republic).

Here, in this masterwork we find a very interesting part consecrated to present the unseen world: the myth of Er. In this myth, Plato portrays the whole world as a harmonic structure, where every planet has its own sphere. Each sphere is associated with a sea-maid who sings a cosmic song and together they created wonderful music, which is well known in Classical musical tradition like „Music of the spheres”. Here we can observe a similitude between Platos sirens and Tolkiens Ainurs, who were invited by Ilúvatar to create a harmonically sounding music, which was then falsified by Melkors „original” creation. In this connection, we may suggest that Tolkiens perspective about Silmarillions musical cosmogony represents a synthesis based on two great religious traditions of the Western culture: the Judaic and the Ancient Greek.

Robert Lazu (PhD Philosophy) is a Catholic philosopher and writer who is currently living in Timisoara (Romania). He coordinates in his Catholic parish a catechetical program based on the teachings of Saint Thomas Aquinas. Robert is married and a father seven.

Theme by Anders Noren — Up ↑